In June 2009 everybody was aware, that solving the problem of equivalent conicity is essential for cost-effective noise reduction of freight wagons.

Noise reduction is a challenge for freight business

LL brake blocks are proving to be a promising cost-effective noise-reducing measure for existing freight wagons, but …

In June 2009 the decision was taken to launch a “Study on Equivalent Conicity” and to follow the idea of the EuropeTrain.

In September 2009 24 railways and the sector organisations CER, EIM and UIC signed the joint resolution to start the preparation of the EuropeTrain 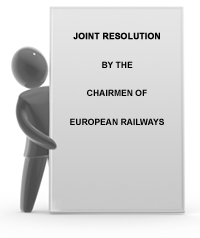 In the 9th meeting of the Directors General of the European Railways in Berlin on 05.09.09 24 of 28 present railways and the organisations CER, EIM and UIC signed the Joint Resolution of the Chairmen of the European Rail Operators on “’Europe Train’ to speed up and improve LL brake block testing in operations”, thus showing their clear will to support a successful development of LL brake blocks as a means for cost-effective noise reduction at the source.

This broad support gave a very good basis to start the preparatory work on the EuropeTrain project.